A film that stumbles out of the starting blocks but slowly transforms into a beautifully crafted and performed period film that illuminates the life -- and especially the inner life -- of French author Violette Leduc.

One of the first women writers in France to tackle issues such as female sexuality, abortion and same-sex attraction head-on, Leduc was not surprisingly admired by her peer and friend, Simone de Beauvoir, though it’s perhaps less known that Leduc’s admiration for her more famous colleague also had a sexual dimension, one of the things that’s suggested with a lot of delicacy and insight here.

The film opens during WWII, when Leduc (Devos) was hiding in the countryside with Maurice Sachs, a writer of semi-autobiographical material who pushed Leduc to write about her own experiences. The couple pretended they were married, though Sachs was gay while Leduc, who felt very ugly, was looking for both human affection and sexual gratification. Provost manages to suggest all this in economical fashion but the pitch of the material is too hysterical, with both Py and especially Devos overacting as if their lives depended on it.

Things calm down and get better after the war ends and Leduc moves to Paris, where she discovers the work of de Beauvoir, who’d just written the menage-a-trois-themed roman a clef, She Came to Stay. Leduc manages to introduce herself and hand the writer her first completed manuscript (here as elsewhere, Provost takes some liberties with the historical record). De Beauvoir’s impressed with the honesty and style of Violette’s writing and the autobiographical book, In the Prison of Her Skin, was published in a prestigious collection curated by Albert Camus (somewhat oddly, and like de Beauvoir’s partner in crime, Jean-Paul Sartre, Camus’s never actually on-screen). 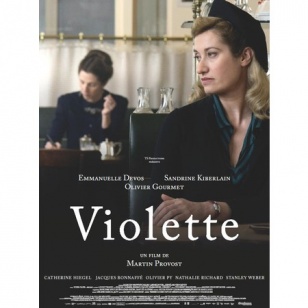