In central Gothenburg, Sweden, a group of black boys, aged 12-14, robbed other children on about 70 occasions between 2006 - 2008. The thieves used an elaborate scheme called the 'brother trick', involving advanced role-play and gang rhetoric. They did not have to resort to physical violence or threats. Play is an astute and humorous observation, based on real cases of bullying, that deliberately plays with preconceptions, and our expectations that it's all going to end badly. 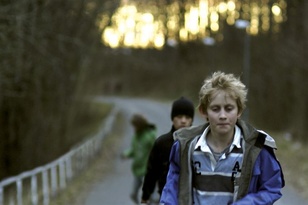