Picnic with Cake is an animated series and cross media adaptation of the famous picture book “Picnic with Cake” by Thé Tjong-Khing, published in more than 13 countries. Each of the 13 episodes, as well as the 25 minute special, tells the central storyline of the picnic, the discovery of the stolen cakes, the unmasking of the thieves and the happy ending with cake. Every episode of the story is told from the perspective of another animal. In this way the picnic story takes the shape of a thriller, a slapstick or a romantic comedy, all tailored to the level of understanding of our target group. 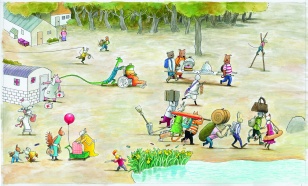