On the beaches of Kenya they're known as Sugar Mamas: European women to whom black beach boys offer sex to earn a living. Teresa, a 50-year-old Austrian from Vienna and the mother of a daughter entering puberty, travels as a sex tourist to this vacation paradise in search of love. She goes from one beach boy to the next, from one disappointment to the next. On the beaches of Kenya love is a business.

Through the power of its images, emotions and performances, "PARADISE: Love" tells of sex tourism, older women and young men, the market value of sexuality, the power of skin color, Europe and Africa, and the exploited, who have no choice but to victimize other victims.

Ulrich Seidl's film is the opener in a trilogy about three women in one family who take separate vacations: one as a sex tourist, another as a Catholic missionary (PARADISE: Faith) and the third at a diet camp for teenagers (PARADISE: Hope.) Three films, three women, three stories of longing. 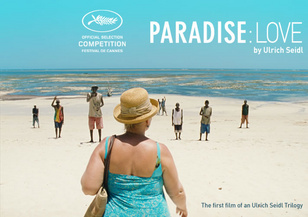