In a small village in the Austrian Alps there is a hotel, now no longer in use. Many years ago, when people still took summer vacations in such places, it was a thriving business. Two sisters grew up here.

Sonja now lives in Berlin. She has become an actress, very successful, a TV star. She made a career for herself very quickly: she is still only in her early 30s. She has achieved a lot in this short time – but something seems to be missing from her life. She keeps a distance from people, as if protecting herself in this way. She goes through phases of sadness. Apart from her work and her professional attitude towards it, she always seems a little lost. Homeless.

Her sister Verena, who is a little older, has never left the village. After their mother died in an accident she, her husband and her little boy moved into the former hotel, which is much too big for them. But Verena’s needs are not as modest as this may suggest. A secret affair with the local doctor brings out a passionate discontent in her, a longing for a different life.

The father of the two sisters also still lives in the former hotel. Still a patriarch, he has grown old and surly. His wife is dead, the hotel out of business. It's autumn, a beautiful October, and the leaves on the trees behind the house are richly coloured.
Then a major heart attack brings him close to death.

He survives, but from now on he is a sick man.
And for Sonja it is high time to visit her family once again, and the scenes of her childhood.

A new chapter begins; old relationships are reconfigured.
The reunion slowly but relentlessly brings to light old conflicts between the so very different sisters. Each of them seems to envy the other. Did they really take the paths in life they wanted to follow? They are in the middle of their lives, but have they yet recognised the most essential aspect of that life?
And then there is the father: so strangely changed. He, of all people, has abandoned his stubborn, harsh attitude towards the world around him. A new serenity emerges from him. As if the realisation that death is close has turned him into a contented human being.
But there is still one secret that oppresses him, something that still has to be done. He knows that he has to act now, as there is not much time left for him.

So that by the time he is lying in the throes of death, and the two sisters keep watch at his bedside, many things have changed.
And it has become November; soon winter will descend upon the land…
A new clarity, a deep reconciliation has entered into the lives of the two sisters. 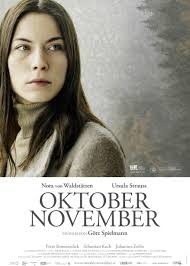