Appleton, Wisconsin, 1886. Harry, 12 years old, has lived and breathed magic since his early childhood. But the small village Appleton is not the best spot for his natural talent to blossom. Although he rehearses endlessly in his parent’s barn he does realize that his dream is far stretched out. One day Harry catches the glimpse of a chance: the New York mayor has called out for a large contest in view of  the Statue of Liberty’s official opening. However one must be tutored by a «real» magician and he doesn’t have the slightest idea of how to contact one… until his father tells him that the great Tesla is in town! Despite the young boys’ lack of knowledge Tesla spots talent, creativity and boldness in Harry. He decides to give him a chance and invites him to his own home, accompagnied by his niece Beth and his robot assistant Amrold.

Tesla will teach Harry the basics of magic, and share his tricks. Will the boy be strong enough to become a true magician? It is a long and winding road which opens for Harry. 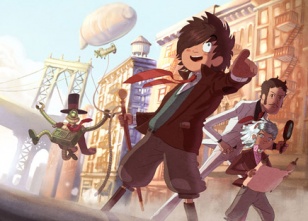