The tender story of Rikard, a severely deformed autistic man whose life is fueled by dreams of sports victory and imaginary worlds.

Bristling with originality, The Giant defies classification: a mythic story told on a very intimate scale; a sports movie played out to a Western soundtrack; a comedy of melancholy optimistism. From this melting pot of ideas, writer-director Johannes Nyholm crafts the tender and emotionally complex story of Rikard, a severely deformed man with autism. Haunted by the loss of his mother, from whom he was separated as a young child, Rikard believes that she will take him back if he wins the Scandinavian Championship trophy in his beloved sport of pétanque (a form of boules). Although surrounded and supported by an army of loving friends and carers who are unfazed by his condition, from time to time Rikard escapes to an imaginary world where he is a 50-metre tall giant. Marrying dazzlingly beautiful fantasy sequences with quietly moving drama, Nyholm filters Rikard’s world through a distinctive soundscape to create an extraordinarily rich and inventive film. 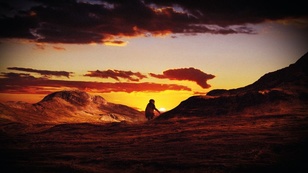