The film portrays Hannah Arendt (Barbara Sukowa) during the four years, (1960-64), that she observes, writes, and en- dures the furious reception for her work about the trial of the Nazi war criminal, Adolf Eichmann. Watching Arendt as she at- tends the trial, staying by her side as she is both barraged by her critics and supported by a tight band of loyal friends, we experi- ence the intensity of this powerful Jewish woman who fled Nazi Germany in 1933. The fierce, chain-smoking Arendt is an exile who is happy and flourishing in America, but whose penetrating vision makes her an outsider wherever she goes.

When Arendt hears that the Israeli Secret Service has kid- napped Adolf Eichmann in Buenos Aires, and brought him to Jerusalem, she is determined to report on the trial. “I never saw these people in the flesh...” she writes the New Yorker mag- azine, and “To attend this trial is an obligation I owe to my past.” William Shawn (Nicholas Woodeson), the editor of the magazine The New Yorker, is thrilled to have such an esteemed intellectual cover the historic process, but Arendt’s husband, Heinrich Blücher (Axel Milberg), is not so sure. He worries that this encounter will put his beloved Hannah back into what they both call the “dark times.”

Arendt enters the tense Jerusalem courtroom expecting to see a monster and instead she finds a nobody. The shallow char- acter of the man cannot be easily reconciled with the profound evil of his actions, but Arendt quickly realizes that this contrast is the puzzle that must be solved. She shares her observations in intense discussions with her close friend and father-figure, Kurt Blumenfeld (Michael Degen). And although they often dis- agree, there is much love and respect between them.

Arendt returns to New York and as she begins to discuss her groundbreaking interpretation of Eichmann, fear ripples through her best friend, Hans Jonas (Ulrich Noethen). Jonas insists that Arendt is taking a far too philosophical approach to this incendiary subject. She’ll only cause confusion, he warns. Arendt stands her ground and Heinrich supports her all the way. After two years of intense thought, additional reading, and further debate with her best American friend, Mary McCarthy (Janet McTeer) her German researcher and friend, Lotte Köhler (Julia Jentsch) and of course, constant consultation with Hein- rich, she finally delivers her manuscript. The publication of the article in The New Yorker provokes an immediate scandal in the U.S., Israel, and soon in the rest of the world. 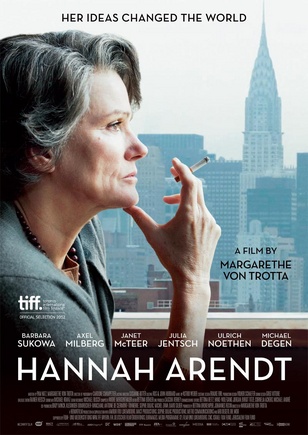