MELLOW MUD is a story about a teenage brother (12) and sister (17) left alone in their small family house in the countryside. After their father’s death and abandoned by their mother, the elder sister has to step into their shoes and become an adult… Siblings Roby and Raya after the death of their father and being abandoned by their mother, are forced to live with their dominating grandmother in a small country house owned by their family. Things change after the sudden death of their grandmother. The teenagers have to face a tough choice: either to report the accident and submit themselves to a life in an orphanage or hide the dead body and live as if nothing has happened.

No one shall know that their grandmother has died. To avoid being taken into the care of the authorities, 17-year-old Raya and her younger brother bury the old woman they grew up with in the garden by the apple orchard. With no one else to depend on, Raya has to organize daily survival for herself and her brother. She’s pinning all her hopes on their mother, who has emigrated to England. The film describes the difficult situation of those left behind in a country that many people have already abandoned. It is a portrait of a resourceful and determined young woman who refuses to give up her dreams despite the hardships life has thrown at her. In her constant struggle to evade the authorities, she tries to find her own happiness while taking care of her brother. 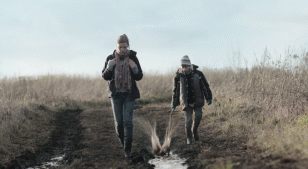