The boy who wanted to be a bear

One day a bear gave birth to a stillborn bear cub. The bear mother was so sad that she lay down on the ice to die. Not far from the bear’s cave, a little boy was born.When the bear saw that his wife wanted to die, he set off in search of a little bear for her. His was not an easy task, for nowhere were baby bears to be found. And so the bear took the woman’s infant boy and brought him to his wife, who brought up the child as if he were her own son. In this way, the little boy learned everything a bear should know. The boy’s mother never got over the loss of her son.She became so sad that her husband promised to kill the bear and bring back her son to her. The man set off to hunt down the bear; finally he discovered the boy’s tracks in the snow, found the bear, killed it and brought back the boy to his mother. However, the boy felt so much like a bear that could not get used to being with people again. He ran back to the bear’s cave to find out how to become a real bear.He learned that he would have to pass three important bear tests. A real bear must be able to cope with the sea and the cold and – worst of all – being alone. As director Jannik Hastrup comments: “This story is neither a piece of natural history nor is it a lesson in Arctic geography; it is a fairy-tale, and, like all good stories, it can take place anywhere and at any time.” 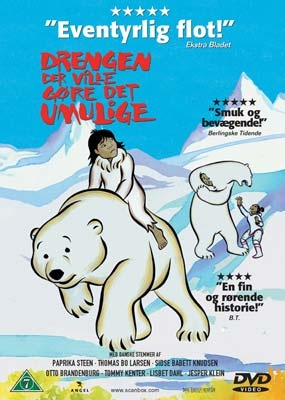