Based on a real event from a Californian high school in 1967 and transposed to Germany today, The Wave is a cautionary tale about the roots of fascism.

The film opens with charismatic teacher Rainer Wegner beginning a week long class on autocracy. To indifferent students, it’s a hard sell, but Wegner gets an idea for an experiment: as their leader he asks the students to call him Mr. Wegner, chooses the motto, creates a logo, decides that everyone wears a white shirt, and names the group, ‘The Wave’ adding a secret sign reminiscent of a Nazi salute. Much to their surprise the students find that they like the power of unity and soon this new found discipline spills over to other school activities and newcomers join the group. The Wave gives the kids something to believe in for a change, until they go too far and The Wave spins out of control. 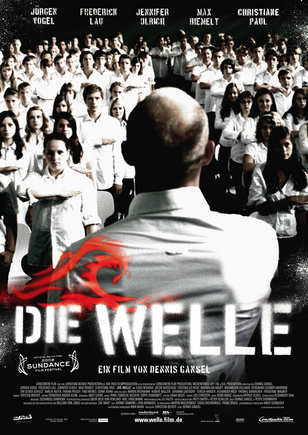