Berlin in 1936. Sorowitsch is the king of counterfeiters. Life’s no more than a game to him in his world of crooks, gigolos and loose women. And the cash he needs for his gambling – he simply prints himself. But then, one day, someone blows the whistle on him; he is arrested by superintendent Herzog and sent to Mauthausen concentration camp. When he is moved to Sachsenhausen in 1944, Sorowitsch fears the worst. But life has one last chance in store for him. On his arrival he is greeted by none other than superintendent Herzog who is here on a secret mission: Sorowitsch and a group of hand-picked professionals are to produce fake foreign currency. And lots of it. The aim of the exercise is to cripple the economies of Germany’s allied opponents – a bizarre idea mooted shortly before the end of a Nazi regime in the vague hope that this would somehow help them to survive the horror. To this end, Herzog has created a golden cage for the expert team of fakers. Theirs are ‘first class’ barracks that are clean; the beds are soft, there is plenty to eat, there are proper toilets, even the odd party. But one thing is made certain from the outset: they face death should their work lead to failure. This puts them in an unbearable moral dilemma: cooperating with their executioners will prolong the war and may mean victory for the Germans. Perhaps they can save their own skins, but they will put the lives of so many of their fellow-sufferers in jeopardy. All of sudden, it’s no longer a question of survival, but one of conscience. 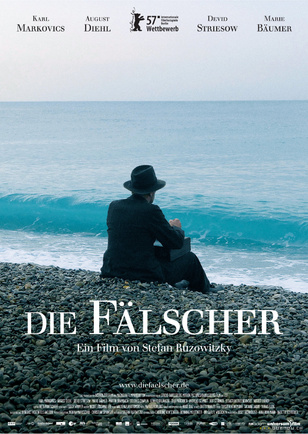