In Portugal – one European country in crisis – a film director proposes to build fictional stories from the miserable reality he is immersed in. However, failing to find meaning in his work, he cowardly runs away and leaves the beautiful Scheherazade to stand in his shoes. She will require enthusiasm and courage so as not to bore the King with sad stories of this country! As nights go past, restlessness leads to desolation and in turn to enchantment. Therefore Scheherazade organises the stories she tells the King in three volumes. She begins like this: “It hath reached me, O auspicious King, that in a sad country among all countries…”.

Volume 1, The Restless One

Volume 2, The Desolate One

Volume 3, The Enchanted One 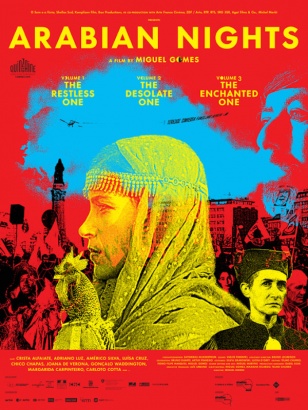