Stories of Love That Cannot Belong to This World

Claudia and Flavio loved one another for a long time, obsessively, and with the clemency of the changing and passage of time. Then it all ended. For her, it was like placing someone at the door hoping that it would suddenly open. At fifty years of age, what they see is a world adrift, like an island. He has within him the fury that provides absolution, because he wants to move forward, to get back down to earth; she is a deep well to be drowned in, because saving oneself would mean forgetting, and the memory must never disappear. The time they allow themselves– and perhaps not only that – is not the same. Flavio meets Giorgia – an instant between them is all it takes, and the summer rain does the rest. She, with the energy and freshness of a thirty-year-old, and the coltish body of someone who does not wish to grow, has already shown him solid ground, and he, burdened by life, has abandoned himself to his desires. Claudia and Nina already knew one another – but at university, divided by their role, their ages, and the idea that respect would never turn to love. And yet Nina is absolutely beautiful, seductive and marvellous. Now her embrace is ravenous, and has a power that no woman can escape. The film is the portrait of two generations, the stitch repairing the pain, a powerful story that speaks of us. 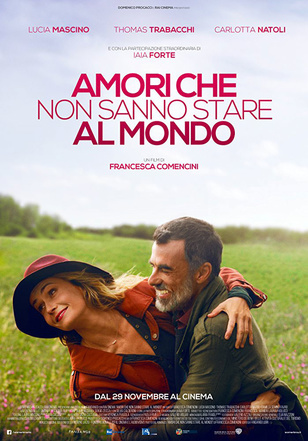