Peter Madsen (42) and Kristian von Bengtson (39) are both working hard to make their dream come true. They are busy building a spaceship that must be able to take a man into space. Peter is the astronaut on the first trip, because Kristian's girlfriend demanded it. Peter and Kristian are standing in an old dirty workshop at Refshaleøen in Copenhagen, where they are building their spaceship. Kristian arrives every day at 9.15 A.M. when he has dropped off his children in daycare. Just before arriving at the workshop, he sends a text to Peter to let him know he is on his way. This gives Peter just enough time to roll out of his berth from underneath the spaceship and get dressed. Peter Madsen is a self-taught submarine builder; specializing in making the impossible happen. He is responsible for the booster part that is supposed to take the spacecraft out of Earth's atmosphere. Kristian von Bengtson has previously worked for NASA and is responsible for building the actual spacecraft that is to take Peter into space - and back home again. Everything in the spacecraft's structure is home made and the materials are all bought at the local DIY shop. 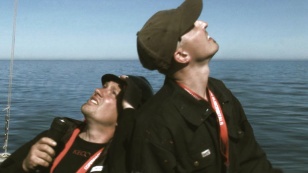