It is the end of summer, 1989. Alois Nebel works as a train dispatcher at a small railway station in the Sudetenland, a mountainous region on the Czechoslovak border. He is a loner who prefers old timetables to people, and he finds the loneliness of the station tranquil – except when the fog rolls in. Then he hallucinates, seeing ghosts and shadows from the dark past of this region where after World War II harsh revenge was exacted on the German population. Alois cannot get rid himself of these nightmares and with the help of the railway worker Wachek, who is eyeing Alois’ job, he eventually ends up in a mental health institute. There he gets to know The Mute, a mysterious man carrying an old photograph who was arrested by the police after crossing the border. Not even electroshocks would make him speak and the policemen are unable to find out why he came to the Sudetenland or who he was looking for. One day The Mute takes his chance and escapes into the woods. Alois gets better and leaves the institute... 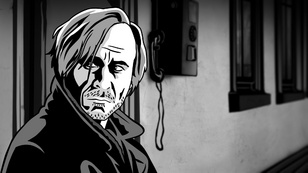