Marian Kuffa with “his children” –former convicts, the homeless and drug addicts- start a new mission in gypsy slums in East Slovakia. A story of genuine courage and power of humanity. During last 20 years he built with “his children” in Zakovce a new home for handicapped senior citizens, single mothers, battered children and former prostitutes. They all passed through hell and find here a helping hand. Former convicts and prostitues turning into kind-hearted nurses. In their farm they raise horses, grow grain, bake bread, make wooden toys; they mastered building trades. After a time they are able to return to ordinary life. But now Marian efforts to change a gypsy slum, step by step educate its inhabitants. In fact, he is faced with the bureaucracies of the state –but also with the Roma themselves. The drama of the “quixotic” struggle with the gypsy rough reality. He is moving at the thin dividing line between life and death. Are we going to witness his success or a tragedy? 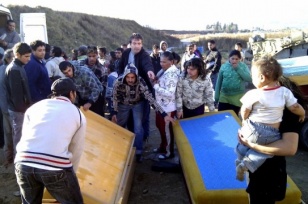